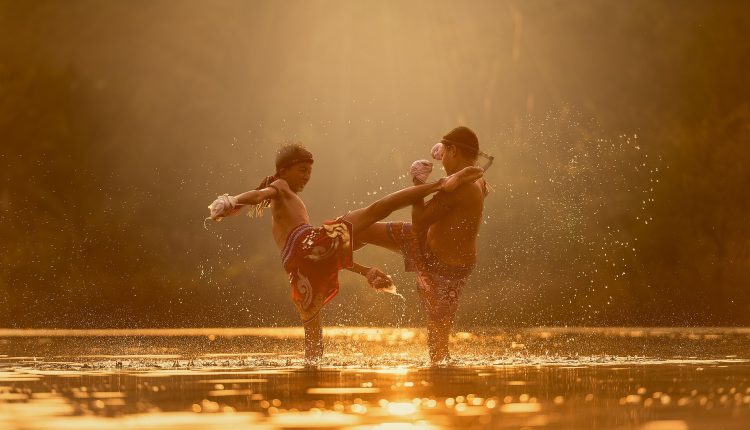 Martial Arts as Practiced in Asia

Asia has a fascinating historical relationship with martial arts and Asia’s unique martial art forms are admired and practiced by many, many people all over the world today. There are more styles of martial arts practiced today in Asia than from any other part of the world.
Most of these arts have taken the form of combat sports, and some in the form of dancing. They consist of using every part of the body; punching, kicking, attacking with the elbows and knees, open-hand combat, throwing, joint locks, pinning, and the use of modern and traditional weapons. And they have a history that dates back thousands of years. In this article, we dig deeper into Asia’s unique martial arts. Whether you actually practice Asian martial arts or you are simply interested to learn more, this article will give you insight into one of most fascinating cultures in Asia.

Đấu Vật, or traditional Vietnamese wrestling, can be seen more as a choreographed dance or performance art with combative elements. What makes this martial art interesting is the fact that fighters aren’t allowed to strike each other. Only grappling is allowed. In a sense, it’s similar to sumo wrestling, but the fighters don’t have to be big. The goal is to tackle the opponent to the ground, making sure that they’re belly-up, chest facing the sky. If done the other way around, it doesn’t count as a win.
Since opponents fight based on weight classes, you don’t often get to see people being lifted in the air in a dramatic winning move. But that’s not to say it doesn’t happen at all. Adding to the performative aspect of the martial art is the use of drums to match the pace of the fight, rising in intensity as defeat nears. The sport takes place all year round, but becomes a huge spectacle during Tet, Vietnam’s most important national holiday that marks the start of the Lunar New Year.

Discover Secret Journeys
in Vietnam
Discover Our Collection
in Vietnam

Sumo is a form of competitive full-contact wrestling where a rikishi (wrestler) attempts to force the opponent out of a circular ring (dohyō) or into touching the ground with any body part other than the soles of their feet (usually by throwing, shoving or pushing him down). This ancient martial art is believed to have originated over 1,500 years ago and is considered today as the national sport of Japan.

With Shinto origins, it is said to have been a form of entertainment for the gods in ancient Japan to pray for a good harvest. It has since developed to become a revered form of entertainment, with sumo festivals also hosting dances and music. In medieval Japan, sumo was taught as a form of combat training and was rarely used for entertainment. When Japan entered a relatively peaceful period, the entertainment factor emerged, evolving into the beloved sport that we know today, and eventually becoming the country’s national sport. Several ancient traditions remain, such as the Shinto practice of throwing salt into the ring to purify it before the wrestlers enter.
The professional athletes, known as ‘rikishi’ have celebrity status in Japan. They are required to live a strict lifestyle, living and training together in sumo stables, and eat a protein and carb-heavy diet which includes a rich stew called chanko-nabe that is made with fish, meat, and vegetables and is famously associated with sumo wrestlers.

Professional sumo remains a male-only sport, with women not being allowed to enter the sumo wrestling ring, but there are smaller female sumo clubs that practice recreationally. There are no weight-related classes in sumo, so many wrestlers gain weight as part of their training. But some of the smaller wrestlers are more agile and can and do use this to their advantage.

Discover Secret Journeys
in Japan
Discover Our Collection
in Japan

Pencak Silat first debuted as a competitive sport at the 1979 SEA Games, which were held in Jakarta, Indonesia. Since then, the martial art has grown in terms of the number and diversity of practitioners. It has travelled too, becoming one of the most popular martial arts in North America and in Europe today.

Pencak Silat originated along the Malay Archipelago, in Indonesia and Malaysia. This martial art comes in over 1,000 different forms, with most of them taking inspiration from elements of nature, like plants or animals. Movements often imitate the respective form of silat’s namesake. For example, silat harimau (tiger move) places an emphasis on moving like a tiger, pouncing on the opponent, and targeting vulnerable pressure points.

The kind of weaponry used in silat ranges from a parang (machete) to a keris (a magical dagger). The artful practitioner when using weapons creates seamless flowing movements, ensuring that any weapons used become like an extension to the martial artist’s body, a deadly but beautiful extension in the hands of a Pencak Silat master.

Discover Secret Journeys
in Malaysia
Discover Our Collection
in Malaysia

Kalaripayattu is the oldest surviving martial art in India. Also known simply as Kalari, it is an Indian martial art that originated in modern-day Kerala, a state on the southwestern coast of India. It involves the use of spears, swords, shields, bows and bamboo sticks. Originating in the south Indian continent, it’s origins can be traced back to 1,000 BCE in the Vedas.

Like most Indian martial arts, Kalaripayattu contains rituals and philosophies inspired by Hinduism. The art also bases medical treatments upon concepts found in the ancient Indian medical text, the Ayurveda. Practitioners of Kalaripayattu possess intricate knowledge of pressure points on the human body and healing techniques that incorporate the knowledge of Ayurveda and Yoga. Kalaripayattu is also taught in accordance with the Indian guru-shishya system. It differs from many other martial arts systems in the world in that weapon-based techniques are taught first, and barehanded techniques are taught last.

It is said that practitioners must use this ancient knowledge to further worthy causes, and not simply for the advancement of one’s own selfish interests. Elements from the yoga tradition as well as finger movements in the nata dances, were incorporated into Kalaripayattu. And several South Asian fighting styles remain closely connected to yoga, dance and the performing arts. In fact, the choreographed sparring in Kalaripayattu can be applied to dance with some traditional Indian classical dance schools still incorporating martial arts movements as part of their exercise regimen. It is also said that a Buddhist monk and master of Kalaripayattu named Bodhidharma introduced the martial arts to Chinese Shaolin monks in 495 CE. If so, Kalaripayattu was a direct influence on the development of modern Chinese Kung Fu. However, there are disputing records that suggest the founding monks of Shaolin were already practicing martial arts.

Discover Secret Journeys
in India
Discover Our Collection
in India

Also known as Kali or Eskrima, Arnis is designated as the national sport and martial art of the Philippines. Like most martial arts, Arnis is primarily used for self-defense, incorporating grappling, hand-to-hand combat, joint locks, grappling, and weapon disarming techniques.

From a purely entertainment standpoint, Arnis is one of the livelier martial arts in Southeast Asia, often making use of the art’s signature baton as the primary weapon of choice. This ups the level of combat and makes for a great spectacle in officially sanctioned competitions. Sometimes the use of bolo (blades) is also permitted. Although in general, emphasis is put on weapons for these arts, some systems put the focus on open handed techniques, with some traditional schools not teaching the use of weapons at all.

Competitive Arnis comes in two different forms: Anyo (performance-based) and Leban (combative). The former is judged based on the smoothness and elegance of the choreography, while the latter is scored based on agility, reactions, and number of strikes. The martial art was officially declared a national sport on December 11, 2009, cementing its status as a national heritage and treasure.

Taekkyon, Taekgyeon, Taekkyeon, or Taekyun is a traditional Korean martial art. It is characterized by fluid, dynamic foot movements called ‘pum balki’ or Stepping-on-Triangles. Taekkyon includes hands and feet techniques with rhythmic dance-like movements intended to unbalance, trip, or throw the opponent. A Taekkyon practitioner is called a Taekkyon-kkun.

Since the twentieth century, Taekkyon has come to be seen as a living link to Korea’s past. As such, it has provided historical references for modern Korean martial arts and is often considered as the oldest martial discipline of Korea. The graceful movements of a well-trained Taekkyeon performer are gentle and circular rather than straight and rigid but can explode with enormous flexibility and strength. In spite of its apparent gentleness, Taekkyeon is an effective martial art highlighting a broad variety of offensive and defensive skills.

This ancient art form also teaches consideration: a skilled Taekkyeon practitioner can rapidly dominate an opponent, but a true master knows how to make an opponent withdraw without incurring damage. As a part of seasonal farming-related traditions, Taekkyeon serves to facilitate community integration, and as a sport accessible to all plays a major role in promoting public health. Taekkyon is the first martial art listed by UNESCO as an Intangible Cultural Heritage.

I think we have saved the best till last. One of the most popular, and deadliest, close-combat sports in the world these days, it’s no wonder people call Muay Thai ‘the art of eight limbs’. With fighters using their elbows, fists (for striking), knees, and legs (for kicking), the entire body is essentially one deadly weapon. Evidence of its global popularity can be seen in mixed martial arts (MMA) competitions, with a considerable number of professional fighters employing the signature Muay Thai striking styles to wear down and defeat their opponents.

Don’t mistake it for Western-style boxing though, despite its English name being called ‘Thai kick boxing’, the only similarity the two sports share with each other is the use of boxing gloves and colorful shorts. The similarity ends there.

Muay Thai is also one of the most dangerous combat sports in the world, with many Thai fighters starting their careers at a very young age, essentially being bred and groomed in local boxing camps to become expertly skilled Muay Thai fighters, often feeding their families along the way from their winnings in prize fights at village and temple fairs and organized matches. The results in the ring can often leave fighters heavily bruised and bloodied, or worse. But with one of the most arduous training styles in all of the world’s fighting sports, the Muay Thai fighters, both boys and girls, are trained to take the pain. Warriors to the end.

Discover Secret Journeys
in Thailand
Discover Our Collection
in Thailand

Here at Secret Retreats we offer our guests authentic travel experiences that go beyond the more typical offerings. Supporting and working closely with our Asia based hoteliers and hospitality professionals our community provides incredible holidays and tailor-made Asia travel itineraries direct to public and to travel agents. And, by booking direct with Secret Retreats, enjoy the peace of mind from knowing that both the on-the-ground team and the team back at Secret Retreats HQ are there to ensure your travel plans go smoothly and to fully support you when they don’t.

Contact our Secret Retreats’ Concierges today who with their uniquely local experience and professionalism will Unveil an Asia to you that cannot be found in any other way.