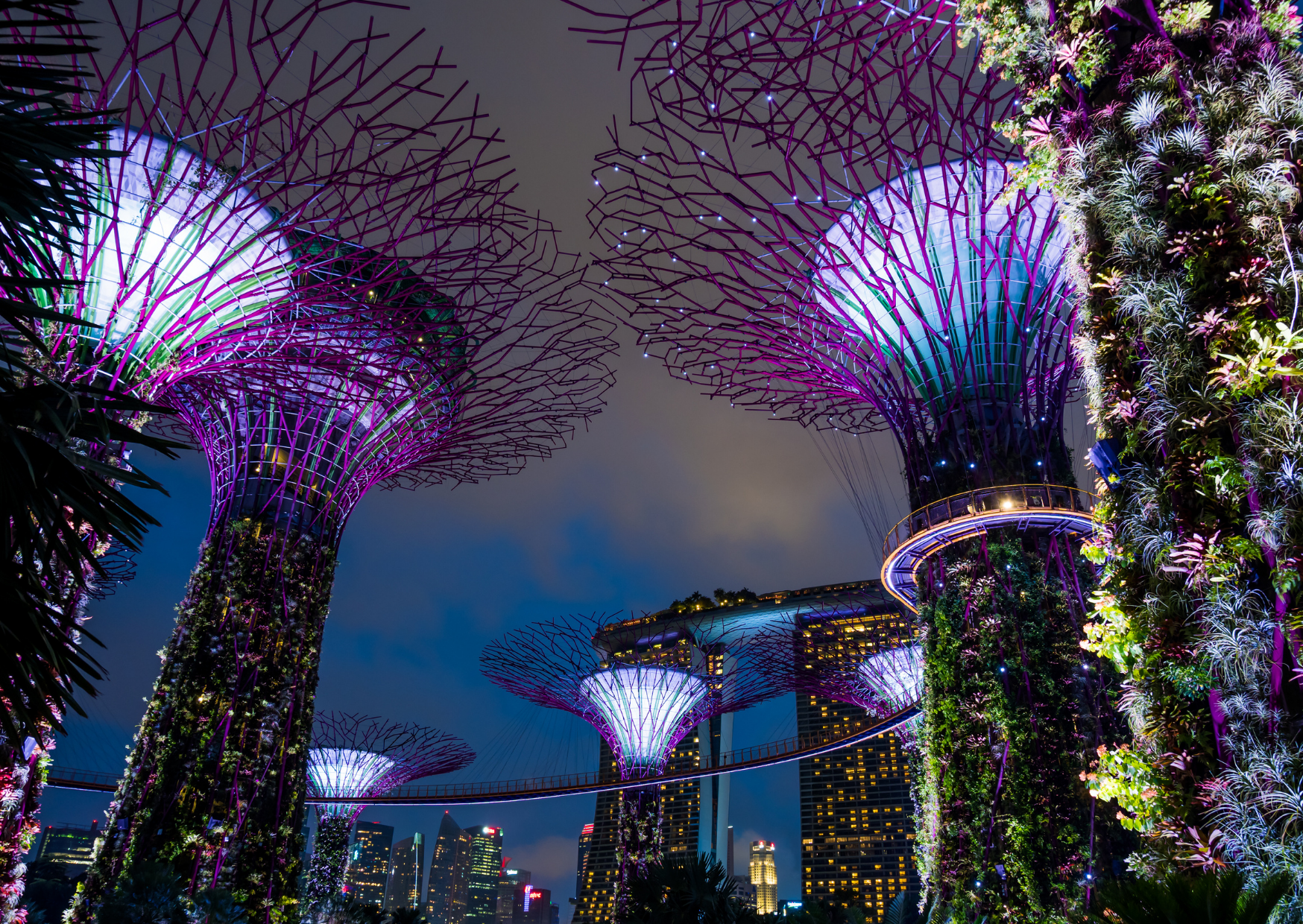 The love of beauty comes naturally to us all, and one of the many things of beauty shared with us by Mother Nature are flowers. You would surely feel that the world is a better place whenever you are wandering a beautiful garden or taking a picnic perhaps within a field of vibrant-coloured flowers under the clear blue sky – except for the folks who are allergic to pollen of course. For wonderful springtime experiences in Asia do take time to get to know these gorgeous national flowers, they are guaranteed to inspire, delight, and lift the spirits of everyone who gets to enjoy these beautiful blooms in their natural environment, here in Asia.

The Sampaguita Jasmine (Arabian Jasmine) was adopted as the national flower of the Philippines in 1934.  The Sampaguita, a small flowering shrub of the Jasmine family (more accurately, the Olive family), bears a white, star-shaped flower which blooms throughout the year. The flower opens at night and lasts for about a day and produces a uniquely sweet and perfumed scent. For the Filipino people, the Sampaguita Jasmine is the symbol of purity, simplicity, fidelity, hope, and strength. It is considered such a symbol of purity in fact that it is unusual for someone to give Sampaguita to another person as a gift or as a sign of adoration because it has a tradition of being solely offered to saints. These delightful flowers are also widely celebrated in Filipino legends, stories and songs, and it is believed that the flower was brought from the Himalayas to the Philippines in the 17th century.

The hibiscus is a large genus comprising several hundreds of species that belong to the family of flowering plants known as Malvaceae. Native to tropical and sub-tropical countries, this floral family of plants shares its beauty with the world in a wide variety of colours and hues from white to yellow, peach, pink and red. With so much variety, flowers from the hibiscus family have been chosen to represent several countries as their national flower. While the Hibiscus Syriacus is South Korea’s national flower, the Yellow Hibiscus is Hawaii’s state flower, and the Bunga Raya or Hibiscus Rosa-Sinensis is the national flower of Malaysia. The five-petaled Bunga Raya (Hibiscus Rosa-Sinensis) has been Malaysia’s national flower since 1960. Symbolically, the five petals of the Bunga Raya represent the “Five Principles of Nationhood”, Malaysia’s national philosophy in strengthening national unity and tolerance, while the red colour is seen to represent courage. Found throughout the country, beyond the symbolic use parts of the Bunga Raya shrub have medicinal and cosmetic uses. But the beauty comes foremost and is apparent across Malaysia where, blooming all day long, the Hibiscus Rosa-Sinensis can be seen decorating the fences of many Malaysian homes and gardens.

The lotus holds a special place in Indian history. A sacred flower, it occupies a unique position in the art and mythology of ancient India and has been an auspicious symbol of Indian culture since time immemorial. In the Hindu holy book of Bhagavad Gita, the lotus is seen as a symbol of detachment. It represents both beauty and knowledge and is often portrayed as the seat of gods. The Goddess Saraswati for example is often depicted seated on a white lotus bloom. The God Vishnu and his wife, the Goddess Lakshmi, are usually depicted standing on a pink lotus flower. Additionally, the God Vishnu is described as the “Lotus-Eyed One”. Signifying divine beauty, this flower that is born from the muddy and dark depths of a lake, grows into a beautiful flower. Lotus flowers are also seen to represent purity of body, speech and mind in Buddhism. This blessed bloom is adored by one and all.

The Rhododendron Arboreum, or Lali Gurans as it is known locally, is the National Flower of Nepal. Lali Gurans translates as Red (Lali) Rhododendron (Gurans) in Nepali and is one of more than 1000 types of Rhododendrons in the world and one of more than 33 varieties of this vibrantly flowering tree that are found in Nepal, each with its own character and hue. The richly red Lali Gurans is commonly found in the hills of Nepal, nationwide, at elevations between 1200m to 3600m above sea level. Coming in to flower around March to April, the Lali Gurans herald the coming of spring. With both shrubs and trees within the genus of Rhododendron, the Lali Gurans is a small tree, and the sight of a forest of Rhododendron in full bloom across a Nepali hillside is truly a sight to behold. The flowers are used to make garlands, used both as gifts and for religious devotion, and are also edible with a popular belief being that when one has something stuck in their throat, eating the flower of a Rhododendron will relieve the problem.

Known as the Mugunghwa, ‘the eternal blossom that never fades’, the Hibiscus Syriacus flower is the national flower of South Korea. This flower first gained recognition in Korea as early as the Gojoseon Era (Unknown – 108BC), when the Mugunghwa was regarded as “a blossom from heaven”. Considered as the founding King of Gojoseon, the first Korean kingdom, King Dangun was said to be a “grandson from heaven” and the “son of a bear” and was often painted with Mugunghwa, exemplifying and cementing its heavenly significance from then to the present day. The Mugunghwa has been important throughout Korean history. During the Silla Kingdom (57BC – 935AD) Korea was known as the Country of Mugunghwa, and in the Goryeo Dynasty (918AD-1392AD) exemplary civil servants were rewarded with paper versions of the flower. Despite its importance, Korea was unable to adopt the Mugunghwa as its National Flower until after the end of Japan’s occupation in 1945. During the occupation, freedom of expression outside of Japanese culture was stifled. In protest of their subjugation, Koreans planted hundreds of Mugungwha flowers as an emblem of their aspiration for independence. Requiring minimum maintenance and fast growing, these plants are very hardy which is part of the reason for its selection as the national flower, easily representing as it does the people’s longing for a burgeoning and lasting national development and prosperity, and because it symbolizes the victories and struggles that the Korean people have suffered throughout time immemorial.

The Water Lily is a beautiful flower that is native to southern and eastern parts of Asia. Used since ancient times to enhance the beauty of lakes and ponds, varieties have white, purple, mauve, or fuchsia-colored flowers. The scientific name of the flower, Nymphaea Stellate, is derived from the Greek word “nymphaia” meaning water lily and the Latin word “stellatus” which means star.

The beautiful Nil Manel or Blue Water Lily was declared as the national flower of Sri Lanka in 1986. More commonly known as the Manel flower, according to Buddhist legends this flower was one of the 108 auspicious signs found in Prince Siddhartha’s footprint. It is said that when Lord Buddha died, lotus flowers blossomed everywhere that he had stepped during his lifetime. A special quality of the Nil Manel is that it blooms almost the whole day, from seven in the morning until five in the evening. Popular for its blend of colours, blooming in shades of pink, blue and white or magenta with yellow in the middle it really is a stunning flower and beautifies landscapes with ease.

If you asked most Japanese people what flower they think best represents their country, then they are likely to point to cherry blossoms. However, the “official” Japanese flower is the 16-petal chrysanthemum as used for the imperial seal. While the flowers bloom for just a short time, chrysanthemums have been used to celebrate the Japanese royal family for centuries. You will see the chrysanthemum imperial seal on the cover of Japanese passports and on some Japanese coins, and over the doors of Japanese diplomatic facilities overseas. Each year there is a festival called the “Festival of Happiness” or Chrysanthemum Day which is celebrated on the 9th day of the 9th month during the time when chrysanthemums come in to flower. Flowers dominate the festival from displays to dining, with chrysanthemum cakes and chrysanthemum teas. Originating in China, chrysanthemums were imported into Japan as a medicinal plant in the Nara period (710–94). The chrysanthemum also features frequently in the Kokin Wakashū anthology of poetry that was compiled in the Heian period (794–1185), suggesting that it was a popular flower in the imperial court not only for medicinal purposes but also simply for its delicate beauty. It is believed the chrysanthemum became the imperial symbol when the 12th century emperor Go-Toba chose the flower as his personal emblem.