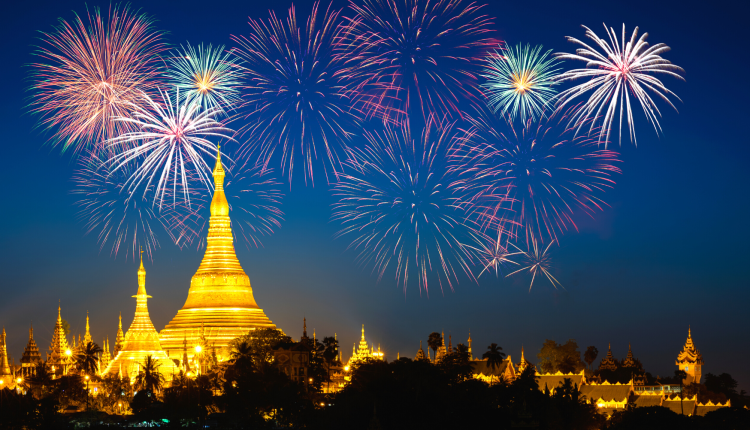 The Golden Architecture of Asia.

Asia is home to a wealth of diverse cultures, unique wildlife, amazing architecture, and landscapes that can only be found in the largest continent on earth. Millions of tourists and pilgrims travel to and across Asia in search of themselves, or wellness, or seeking spirituality and meaning, or simply for a few moments of tranquility and escape from the fast-paced and tumultuous world we live in today.

To get to know this continent a little deeper one can start by looking at colours and their meanings. Universally a symbol of wealth, in most Asian countries, yellow and gold is reserved for royalty, and is also associated with courage and strength. But for Buddhists, the purity represented by gold connects this rare metal and this colour to spirituality. This week, we take you to some significant places and treasures around Asia that sparkle like gold and are full of extraordinary charm. Let’s explore Asia like a local!

The Shwedagon Pagoda is the most sacred Buddhist pagoda in Myanmar. It is believed to contain relics of the four previous Buddhas of the present kalpa (aeon). A golden beacon in the heart of Yangon, it is guarded by Burmese mythological lions.

According to tradition, the Shwedagon Pagoda was constructed more than 2,500 years ago, which would make it the oldest Buddhist stupa in the world. The story goes that two merchant brothers Tapussa and Bhallika met the Gautama Buddha during his lifetime and received eight strands of the Buddha’s hair. The brothers presented these eight strands of hair to King Okkalapa of Dagon who enshrined the strands along with some relics of the three preceding Buddhas in a stupa on Singuttara Hill in present-day Yangon and where the Shwedagon Pagoda sits to this day. The stupa’s plinth is made of bricks covered with gold plates made of genuine gold. Above the base are terraces that only monks and men can access. Next is the bell-shaped part of the stupa. Above that is the turban, then the inverted alms bowl, inverted and upright lotus petals, the banana bud and then the umbrella crown. The crown is tipped with 5,448 diamonds and 2,317 rubies. Immediately before the diamond bud is a flag-shaped vane. And at the pinnacle of the stupa is the diamond bud which houses a 76 carat (15 g) diamond.

The 60,000 square meter terrace allows visitors to feast their eyes on the gold-covered stupa and its diamond-studded spire. Shwedagon Pagoda is one of several Myanmar temples that showcase the beauty and spirituality of a region that has long endured earthquakes, wars, and turmoil and remained a beacon of light and hope to the people of Myanmar.

Discover our Collection in Myanmar

The Pha That Luang or ‘Great Stupa’ is one of the most important Buddhist monuments in Laos. This large golden stupa is located in Vientiane, the capital city of Laos, and is believed to enshrine a breastbone of the Buddha. The pagoda also known as That Luang is officially named Pha Chedi Lokajulamani, which translates to World Precious Sacred Stupa. Local legend tells us that monks sent out by the Indian King Ashoka to spread Buddhism arrived in the Vientiane area in the 3rd century BC and a stupa was erected where Pha That Lunag stands today to enshrine a sacred relic from the Buddha.

The Pha That Luang we see today was built in 1566 after King Setthathirath had made Vientiane the new capital of the Lan Xang Kingdom. At that time the pagoda was covered in gold leaf. In 1827 most of the city of Vientiane was destroyed and looted by Siamese invaders and Pha That Luang was heavily damaged and abandoned. It was rebuilt in the 1930’s by the French to its original design.

Pha That Luang is a national symbol of Laos and also features on the local currency due to its spiritual and historical significance. Covered in gold leaf as it is again today, the Great Stupa is a highlight of the Vientiane skyline and a must-see for any visitors to this fascinating city.

Discover our Collection in Laos

For thousands of years The Boudhanath Stupa has stood as a beacon of Buddhist belief, towering over the surrounding town as a giant mandala of peace and beauty, its giant eyes gazing down benevolently on the people of Kathmandu.

Tibetan pilgrims flock to Boudhanath to take part in the daily Kora ritual which involves walking clockwise around the temple and spinning its prayer wheels. Located on what has long been an important trade route, the Boudhanath was founded over 1,500 years ago and to this day this huge meditative monument is a focal point of worship as well as one of Kathmandu’s most popular tourist sites. The structure of the building consists of a giant dome, on the top which sits a Buddhist pyramidal tower.

The main focal point in this ancient temple is the all-encompassing stupa with its large Buddha eyes. The highly symbolic stupa serves in essence as a three-dimensional reminder of the Buddha’s quest to achieve enlightenment. Among the Nepalese in Kathmandu, the stupa is simply referred to as Chorten Chenpo which translates to Great Tower or just Great Stupa.

The site become an unofficial center of Tibetan Buddhism in the 1950s when refugees from (Tibet) China fled to Katmandu. Temples and devotional sites began to spring up throughout the surrounding city and further afield, strengthening the power and importance of the site immeasurably.

The base of the stupa’s tower has colourful and stylized pairs of eyes set on each face of the tower, looking out to the 4 cardinal points and representing the all-knowing nature of the Buddha. The inescapable gaze of the stupa’s eyes seems all knowing, as if the stupa truly houses a presence, a spiritualty, a thought that maybe raises wonder in even the most secular minds.

Discover our Collection in Nepal

Kerala is home to one of the most famous Asian temples on the continent. Located in Thiruvananthapuram, in Kerala India, the 8th century Sree Padmanabhaswamy Temple is one of the 108 temples in India dedicated to Lord Vishnu. A Hindu temple, here you will find Lord Vishnu reclining on the hooded serpent Anantha. Constructed in an intricate fusion of the Chera and Dravidian style of architecture, what we see today is the result of the meticulous renovation work on the ancient temple. But the temple is considered to have been founded over 12 centuries ago. The massive golden gopuram, or monumental tower, is 7 tiers high, with windows piercing the structure that during the two days of the equinox, visitors can witness the impressive sight of the setting sun appearing through each of the gopuram windows of this massive golden structure. While the decadence of the gold plated gopura is impressive, the temple’s wealth is legendary beyond compare. Long famed for its hidden vaults filled with treasure, in 2011 six vaults were opened that were filled with an Indiana Jones quantity of gold and precious stones. With a value conservatively estimated at more 22billion dollars the 6 vaults contained solid gold idols, diamond necklaces over 18foot long, uncountable numbers of gold coins, and 30kg solid gold coconut shells filled each one filled to the brim with emeralds and rubies.

Discover our Collection in India

Kinkakuji or Golden Pavilion is a Zen Buddhist temple located in northern Kyoto whose top two floors are completely covered in gold leaf. Formally known as Rokuonji, the temple was the retirement villa of the shogun Ashikaga Yoshimitsu, and according to his will it became a Zen Buddhist temple of the Rinzai sect after his death in 1408. The Kinkakuji was also the inspiration for the similarly named Ginkakuji or Silver Pavilion that was built by Yoshimitsu’s grandson, Ashikaga Yoshimasa, on the other side of the city a few decades later.

Kinkakuji is an impressive structure built that overlooks a large pond the reflections within which make for a photographer’s paradise. Sadly it has seen more than its fair share of damage over the years, having been burned down during the Onin War, a civil war that destroyed much of Kyoto and again more recently in 1950 when it was set on fire by a monk. The present structure dates from the 1955 renvation.

Kinkakuji was built to echo the extravagant Kitayama culture that developed in the wealthy aristocratic circles of Kyoto during Yoshimitsu’s times. Each floor represents a different style of architecture.

The first floor is built in the Shinden style used for palace buildings during the Heian Period, and with its natural wood pillars and white plaster walls contrasts yet complements the gilded upper stories of the pavilion. Statues of the Shaka Buddha (historical Buddha) and Yoshimitsu are stored on the first floor. Although it is not possible to enter the pavilion, the statues can be viewed from across the pond if you look closely, as the sliding doors are usually left open.

The second floor is built in the Bukke style used in samurai residences and has its exterior completely covered in gold leaf. Inside is a seated Kannon Bodhisattva surrounded by statues of the Four Heavenly Kings. Finally, the third and uppermost floor is built in the style of a Chinese Zen Hall, gilded inside and out and capped with a golden phoenix. Designated as a National Special Historic Site, it is one of 17 locations that make up the Historic Monuments of Ancient Kyoto which are today protected and listed as World Heritage Sites.

Discover our Collection in Japan

The National Monument stands in the centre of Merdeka Square in Jakarta. Built to commemorate Indonesia’s proclamation of independence on the 17th of August 1945from their Dutch overlords, the monument houses the first flag of independence. This important, red and white flag has now become threadbare so nowadays on Independence Day ceremonies, the original flag is taken out but only to accompany the replica flag which is flown in front of the Merdeka Palace.

The 137 meter tall National Monument is obelisk shaped and is topped with a 14.5-meter bronze flame that is coated with 32 kilograms of gold leaf. Within the pedestal is a museum depicting in diorama Indonesia’s fight for Independence as well as the original text of the Proclamation of Independence. A lift takes visitors up to the look-out platform at the base of the flame for a fantastic view of Jakarta.

During the Dutch colonial days Merdeka Square was the center of government, known as Koningsplein or the King’s Square. The north side is dominated by the Merdeka Palace once the home of the Dutch Governor Generals, which today houses the office of the President and the cabinet. To the South is the office of Indonesia’s Vice President, Jakarta’s Governor and the provincial parliament building and the American Embassy, and to the West is the National Museum, the Constitutional Court, the Ministry for Culture and Tourism and the Indosat building, Indonesia’s first international telecommunications company. Surrounding the Monument is a park with a musical fountain, enjoyed by the Jakarta public on Sundays for sports and recreation.

Discover our Collection in Indonesia

With our carefully curated portfolio of unique properties and experiences throughout Asia – including stylish boutique hotels, design-driven villas, unique cruises and high-end restaurants – Secret Retreats is uniquely positioned to offer an exclusive collection of highly localized itineraries, special offers and packages across the Asian continent. The Asian holiday packages offer the intriguing promise of discovering ‘secret spots,’ known only to those who live in the region and introducing the sights, sounds, tastes and beauty of local life beyond the beaten path of the familiar tourist tracks and traps.

EXPLORE OUR ASIAN DESTINATIONS for WATER SPORTS and ACTIVITIES

Beyond Halloween: 5 Fiendish Ghost Stories for Halloween from Asia