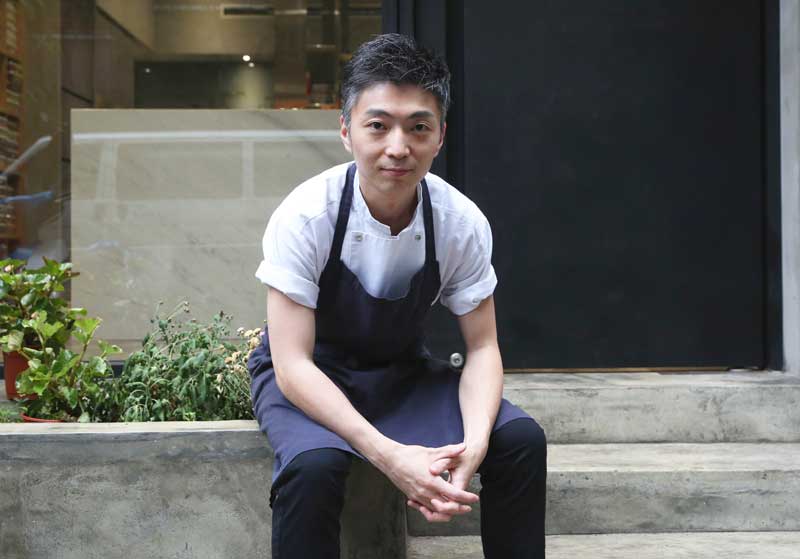 Chef Richie Lin of Mume restaurant offers some guidelines for exploring Tapei’s food scene and discovering some of his favourite Taiwanese specialities.

Not much has been said about Taipei’s dining scene until recently. As Taiwanese chefs and restaurants begin to win awards, beginning with Lanshu Chen of Le Moût as Veuve Clicquot Asia’s Best Female Chef in 2014 and then her joint entry on Asia’s 50 Best 2017 together with Mume and RAW, the world is beginning to sit up and take notice of the city known first and foremost for its night markets.

One of the city’s most prominent chefs is the Hong Kong-born Richie Lin of Mume restaurant. Trained in Quay, Sydney, and Noma, Copenhagen, Lin witnessed the rise of Taipei as a food destination having opened Mume as a co-owner in December 2014. The restaurant’s debut on Asia’s 50 Best Restaurants list in 2017 came as no surprise given the publicity the chef garnered for his farm-to-fork philosophy. Be it white asparagus, blush prawn, flower crab, chocolate or amadai fish, the chef now sources between 90 to 95% of his produce locally.

Juggling his dual role as a father with two young children and a chef, Lin is always time-strapped but he makes it a point to host overseas chefs at local eateries when they travel to Taipei for pop-ups. So,where to eat in Tapei? Here’s how you can dine like a local with a tip or two from Lin.

“You can’t come to Taiwan without trying our traditional breakfast of shao bing (unleavened layered flatbread) wrapped with you tiao (dough fritter) dipped in a sweet or savoury warm soya bean milk and Fu Hang is the city’s most famous. Come early as the queue here starts at about 5am.”

“Founded by James Chen, who topped the 2013 Nordic Roasting Championships, Fika Fika is a Nordic-style cafe widely considered to be one of Taipei’s best coffee roasters. I usually drink the daily’s special as a long black but the filtered coffee is really good too.”

“Jin Feng is home to one of Taipei’s most reputable lu rou fan (braised pork rice), a local staple of rice topped with braised minced pork. Located right outside the Nan Men Market, the pork rice dish is best washed down with a light and delicate pineapple chicken soup.”

“When I crave for casual, American-style brunch, I go to Spot Taipei for chicken waffle, pancakes or pasta; the food here is always well executed.”

“For the best that Taiwanese cuisine has to offer with local produce to boot, make a reservation at Mountain and Sea, order the suckling pig, the cold platter and the pickled vegetables.”

“Ryugin Taipei might just be my favourite restaurant in Taipei. They use predominantly local ingredients and yet execute the kaiseki at a very high level. My favourite dish is the Taiwanese pigeon slow-cooked in oil, then smoked, grilled and served with tuberose.”

Ryugin Taipei
No. 301, Lequn 3rd Road, Zhongshan District, Taipei City
“With only 10 to 13 seats and a reservation list of about four to six months-long, the hardest sushi-ya to book in Taipei is Sushi Amamoto; I highly recommend the omakase.”

“In Taipei, we get high quality seafood from Turtle Island in Yilan and Xiaozhang’s Seafood serves these in a daily-changing menu featuring highlights like raw prawn or langoustine. The stir-fried vegetables are delicious too.”

“For a comforting midnight snack, nothing beats the sweet potato congee at Xiao Lizi. The congee here is smooth and velvety and a perfect match with the buffet of small plates like fried egg oyster omelette and raw baby clams in rice wine, garlic, soy sauce and chilli.”

“Ah Tsai Milk Fish is a late-night stir-fry joint known for its legendary milkfish belly. It’s cooked a la minute and you may have it pan-fried, braised or as a soup.”