Traditional Dances of Asia: The Beauty, Spirituality and Cultural Heritage of Asia 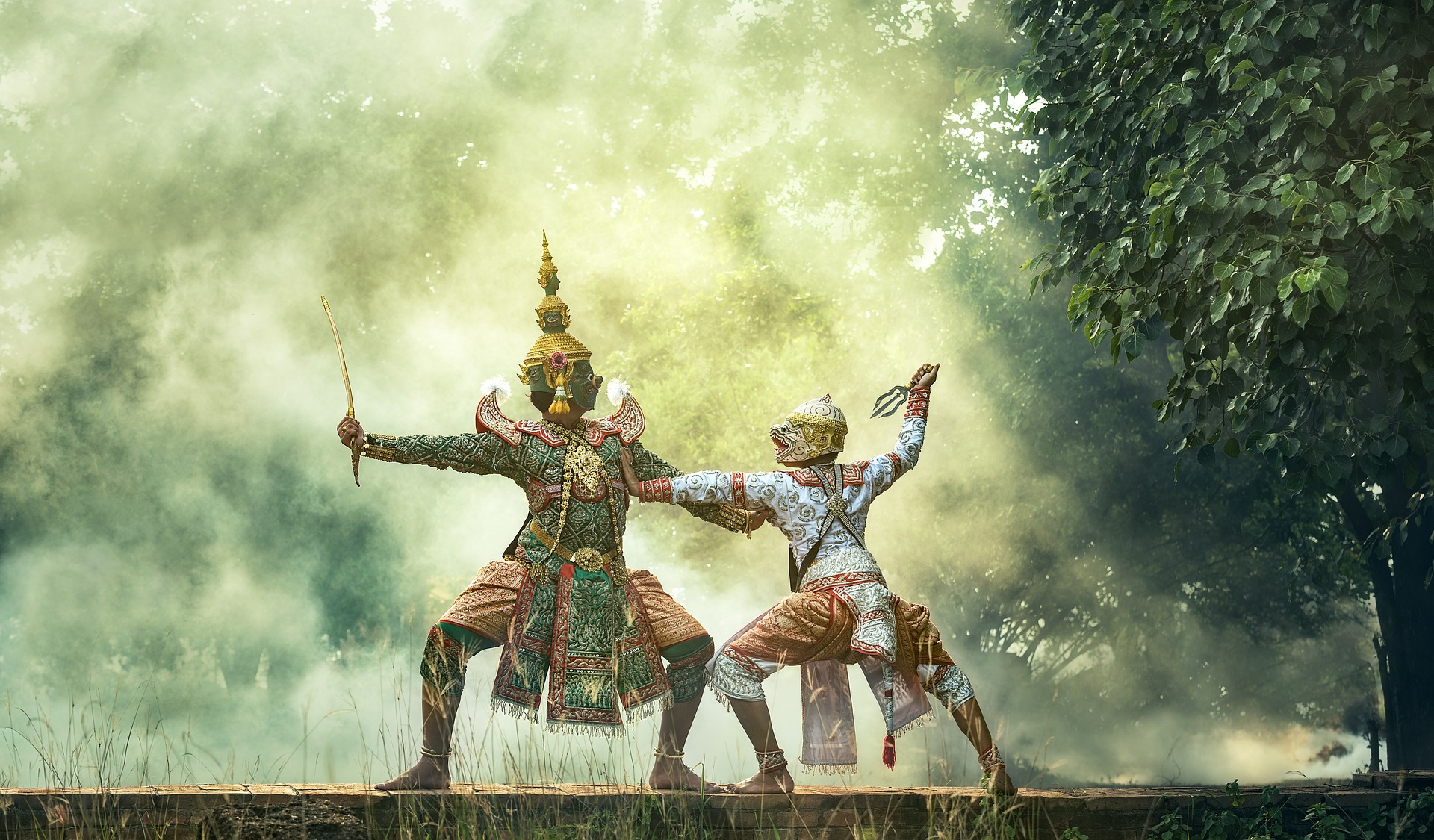 The diverse cultures, religions, and traditions of the different countries of Asia are reflected not only in their lifestyles but also in their art forms. This mystic continent, with its rich oriental essence and aesthetic fervor, is a treasure trove of distinct cultural varieties that are so beautifully reflected in the performing arts. These art forms, including music, drama and dance, are clearly representative of their regions and cultures of origin. The mythical stories, the tribal and religious rituals from everyday life are the inspirations for many of Asia’s dances. Each country in Asia is populated by indigenous and once nomadic ethnic groups and all of these groups have their own unique identities and traditions, which are also visible in their dances. Dance is one way of communication and just like a verbal language it can share the stories and ancient legends from history through the accompanying traditional music and song, meaningful movements and even the costumes and dress. As ancient as time itself, these mesmerizing art forms communicate to the audience from across the ages without the need to understand a single word of their language.

Renowned worldwide, Kathakali’s magnificence has won great admiration for the state of Kerala. Kathakali originated on Kerala’s shores over 300 years ago. The dance combines devotion, drama, music, colourful costumes and make-up into a divine experience for all who get to view it. Kathakali retells ancient stories from Hindu legends, the Indian epics, that leave one spellbound at the depth and intricacy of the performance. Every single quiver of the lips, flicker of the eyes or movement of the hands has great significance. The dance synthesizes music and voice with delicate and dramatic choreography that uses whole body movement and facial gestures to retell the India’s ancient stories and legends. The detail within the performance and the accuracy required in executing the movements and gestures takes a lifetime to perfect. Kathakali artists will tell you that they are learning and perfecting this artform almost from the cradle to the grave.

With the average time required to prepare a single dancer for a performance being four hours, the costumes and colors of a Kathakali performance are truly beyond compare. Along with the colours within the costumes and head-dresses, the Vesham or make-up is designed to portray the distinct characters within the stories and performance. Each colour symbolizes the predominant emotions and attributes of the character. And all the colours used in each make-up are obtained from natural substances, minerals and herbs. Pacha (green) portrays noble and heroic characters, Kathi (a knife shaped pattern on each cheek in red) portrays heroes with a villainous or evil streak, Kari (black) symbolizes primitive beings of the underworld both male and female, Minukku (yellowy orange) is used for gentle female characters and sages, and the Thaddi (Beard) character make-up where beards, symbolic of wickedness, are applied. The beards come in 3 colours, red, black and white, each colour symbolizing subtle nuances to the character’s evilness, with red beards for the ultimate in evil, white for a more thoughtful, divine form, and black beards for evil tricksters. This classical Indian dance form is an experience not to be missed on any visit to India, but especially when visiting the south-western coastal Indian state of Kerala, home to the magnificent Kathakhali Dance Form.

Meaning ‘water nymph’ or ‘celestial spirit’, the Apsara is deeply rooted in ancient Hindu mythology. Legend has it that Apsaras are beautiful, divine female creatures that descend from heaven to entertain both gods and kings with their enchanting dance. Legend also says that the beautiful beings were born from the Churning of the Ocean of Milk, also referred to as Samudra Manthan in Hindi or Ko Samut Teuk Dos in Khmer. Apsaras appear in both ancient Hindu and Buddhist texts and artworks and are beautifully depicted in the art of Angkor Wat with their story stunningly depicted on a 49-metre bas-relief set into the walls of Angkor Wat, and their form appearing in sandstone carvings throughout the temple complex but perhaps most beautifully in the pink sandstone carvings of the lonely Bantei Srei temple, located deep within the Angkor Archeological Park. Since the spirits are meant to entrap mortals with their beauty, similar in some ways to the Mermaids, Nymphs and Sirens of western mythology, the dance moves reflect this idea and include slow-paced, mesmerizing moves that hypnotize the audiences.

At the beginning of the 20th century Queen Sisowath Kossomak Nearirath Serey Vatthana of Cambodia visited the Sothearath Junior School where the young children performed a dance inspired by the images of the Asparas in the bas-reliefs of the nearby Angkor Wat. This inspired the queen to recreate and develop the Apsara dance, leading to her granddaughter Princess Norodom Buppha Devi, to become the first professional Apsara dancer in modern times. Working with the Royal Ballet of Cambodia, of which the Princess became Prima Ballerina and eventually director, the designs of the costumes, head-dresses and jewelry were all inspired by the representations of Apsaras that adorn the Angkor Temple Complex and the few historical references that have survived. Today, the Apsara Dance is considered a classical dance of Cambodia and was listed in 2003 as a Masterpiece of Oral and Intangible Heritage of Humanity by UNESCO.

There can be no better place to experience this rare and beautiful dance than within the shadow of the Angkor Temples, perhaps as a wonderful climax to a candle-lit dinner of creative Khmer cuisine. A perfect example of the kind of unique travel experiences that the Secret Retreats Concierges enjoy sharing with our guests.

The Manohra Dance is believed to have originated in Phatthalung, Southern Thailand, towards the end of Thailand’s Ayutthaya Period (1351–1767). More a ceremony and ritual than simply a dance, the Manohra Dance is a form of dance-drama inspired by a story from the Jataka, a collection of stories about former lives of the Buddha. The dance tells the story of Prince Suthorn and the Kinnaree, Manohra, who fall in love and like all great stories includes a love affair, jealousy, scheming, a rescue and a happy ending – and not a car chase in sight. A Kinnaree is a mythical and magical creature, half bird and half human.

The dance often forms a key part of a ceremony used to repay a promise to the spirit world – a common practice in Southeast Asia where spiritual help is invoked on the promise of repayment in the form of offerings or special performances. A variation on the Manohra, locally known by its shortened form ’Nora’ can last 3 days and involve mediumship and spirit possession to benefit from wisdom and advice from the other side as well as repay a promise to the spirit world. The ceremony takes 2 days and 3 nights, with the performance area ringed by strings of hanging bananas and sprinkled holy water to ward off evil and trouble-making spirits. The dance and performance are supported by enthusiastic and loud music played on traditional instruments. The whole performance includes a lengthy spiritual invocation, the dance, and finally a fun play. The Manohra, or Nora, dance involves 12 positions with 17 precise and intricate gestures that mimic the movement of birds and beautifully colourful costumes to represent the rich plumage of this magical bird-like creature. The expressive hand movements are exaggerated and beautified by the apparently long fake nails or talons that are in fact long and curved shiny metallic finger extensions.

Unique and inimitable, the Manohra Dance, and Nora Ceremony, are an incredible window into the minds and beliefs of an ancient culture, still respected and practiced today in communities in Thailand, and parts of Malaysia, where heritage and tradition is still very much a part of the everyday experience.

Margapati Dance Bali – The Dance of the Savage Lion

Since forever, Bali’s cultures and traditions have been firmly tied to the natural world and the environment. The many religious rituals are delivered both in honour, and as gifts, to the ancestors, nature and the spirit world. With beautiful offerings and eye-catching cultural performances, many of Bali’s artistry and art forms were born out of the need for ever more creative offerings to gods and the spirits of the ancestors.

With nearly 90% of ethnic Balinese being practicing Hindus, it is no surprise that many of the dance forms are inspired by classical Indian dance where the intricacy of hand gestures and facial expressions are such an important part of the art form. And the Margapati Dance is one such form. Created in the early 20th century by a locally famous classical dancer, I Nyoman Kaler, the dance cleverly combines the typically forthright and strong movements of male dance styles, with the grace, poise and beauty of female styles. The dance is usually performed by female dancers and tells the story of a lion, the king of the jungle no less with the name of the dance derived from Mrga meaning beast and Pati meaning king, prowling its domain hunting down prey. The costume for the dancer symbolizes masculinity with their body and legs wrapped in a traditional Balinese Batik gilt fabric known as Prada where the cloth achieves a bright and truly golden colour from the gold leaf or gold dust that decorates this most regal of fabrics, a Badong necklace and Udeng headpiece, which are designs all typically worn by male dancers.

One of Secret Retreats’ favourite properties on Bali, the owners of which take the conservation of Bali’s heritage and arts very seriously, is one of the best places on the island to see the Margapati Dance performed in all its regal glory. Be sure to contact the Secret Retreats Concierges when planning your next trip to Bali and Indonesia and we will help you build and book an itinerary full of travel wonders, secret spots and local knowledge sharing the best of each destination’s heritage, culture and tradition with you and your loved ones.

Why not start planning to fulfill your authentic Asia travel bucket list by contacting the Secret Retreats Concierges today. We’re looking forward to hearing from you!

TAILOR-MADE TRAVEL: Why Laos Should be Your Next Travel Destination.